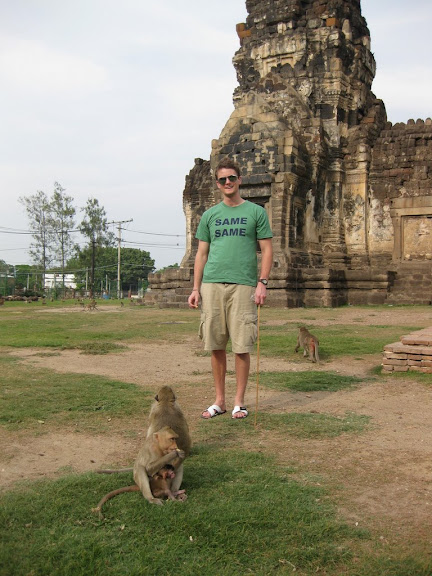 Northern Thailand is lush, verdant, and completely ours. We took Lada’s car, equipped with a brand new overpriced gps, and made our way north to Lopburi where the monkeys are sacred. An ancient temple encircled by traffic, dingy buildings, and street vendors is home to hundreds of red-assed monkeys. The people here take good care of the little buggers, which is evident in their mostly relaxed behavior when presented with a peanut-toting farang.

It’s easy to get nervous around monkeys. They walk towards you at unpredictable speeds: sometimes slowly, then a few quick hops and their right under you. And they stare… they stare you down. Looking back you wonder if the same thoughts are going through their head: “are you gonna be nice?”

Turns out they were. They had gotten used to humans. Unlike the monkeys around Angkor Wat, these monkeys had survived because, not in spite, of humans. Lada tells me that every so often the townspeople get together and set up a huge buffet… just for the monkeys. Not a bad life, probably. But then again, the transition from a wooded to a concrete forest must have been a tough one.

I snapped plenty of pics and vids. Lada scrunching her face in fear while the monkeys snatch the food out of her hand is a priceless moment. And there’s the video of a baby monkey climbing my shorts to get at, and steal, the bag of peanuts in my hand, just before another steals the very stick I was supposed to use to keep them at a distance. Sneaky little turds. I’d want one if they weren’t so damn… human-like.

An hour later we had our fill of monkeys, and they our food, so we got in the car and headed on to the next town. After a pretty uneventful night in what must have been a ghost-hotel, we drove to Lampang to check out the elephant conservatory.