The glory and tragedy of Cambodia 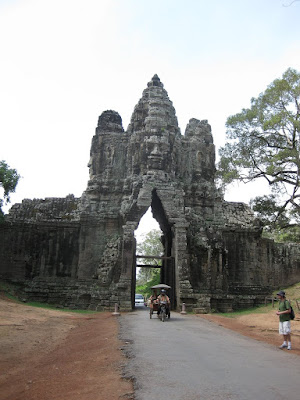 I’m all took tooked out, man. Took tooks are the taxis of South East Asia. It’s a moped or moto attached to a passenger carraige. I think I’ve heard, ‘sir, took took!’ or ‘hey guy, took took!’ or even ‘lady, took took!’ more times than I’ve blinked these past few days. Telling them you already have a driver works much better than just saying no.

It’s amazing that most of this sprang up in the last two decades, with 1/4 of the population wiped out and the rest suffering pshycological damage and a severe lack of education. Humans will endure. Crazy power-mongers, sociopaths, or self profesed ‘do-gooder’ revolutionaries cannot completely destroy the march of civilization… thank goodness. But they sure can set it back a generation or two.

Due to the wars/revolutions of the seventies and eighties, Cambodia is still largely undiscovered. Unlike Thailand, India, all of South America, and probably most of the rest of the world tourism and globalization is still just getting started around here. So, if you’re going to check our Cambodia, do it now! Before it turns into another sterile tourist-churning machine. Just keep an eye out for land mines…