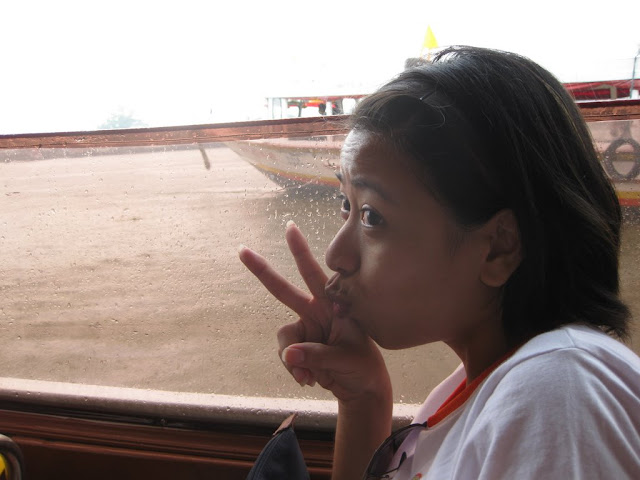 Pootie on a boat tour around Bangkok

This entire country smells of sticky rice. There’s a sweetness to it, mixed with the dense warmth of the tropics, that enveloped me as I walked off the plane. Ah… Thailand. Familiar thoughts and feelings swept through me. Some spectacular, some awful. All unique.

We drove directly to Lada’s apartment last night from the airport. They drive on the wrong side of the road around here, which, mixed with the inherent discomfort I associate with being Lada’s passenger, made for an alert and memorable ride. 25 hours of mostly sleepless traveling won’t take from you a healthy fear for your life.

Through 40 minutes of highway cruising, 4 toll stops, and a number of last second lane changes we made it to the research/industrial/educational complex that houses Lada’s apartment and work. This is a rather exceptional facility, rivaling those of any other developed nation. Tall, white buildings crowned in marble and stainless steel line well-manicured streets. And cafes, barbers, and grocery stores provide the essentials of a complete living package.

Strange though, that just across the main road from here are shanty-town-like clusters of shops and shelter of the less fortunate. Perhaps nowhere in Bangkok is there such an obvious and wide disparity between the haves and the have-nots, the developed and the under-developed. It’s an odd little borderland town between the opulence of the city, and the poor ruggedness of the country.

I met Lada’s friends today. I saw where she eats, works, relaxes, and eats. I’m the only farang (gringo) around. Keep getting those sheltered glances, and giggles when I say ‘sawadi krap’ in my farang accent with a hands together bow. I think they’re generally amused. Laughter makes things easier, even if they’re laughing at you.

Lada’s off to work. She has a meeting at 11:00. I’m in the coffee shop with an expresso and internet… so I’m happy. Her friends are going to take me to lunch today. Everyone here speaks English, but most are a bit too shy to give it a concerted effort. They’ll loosen up when they get used to me, and I to them. I’ve been studying Thai a little, so I can ask for some things and make a number of other basic comments. But mostly people around here pick up pretty quickly that I’m a clueless farang, and say things in English.

Tonight we’re going downtown to party. That is, if I’m not stupid tired. I slept reasonably well last night, which was kind of a shock. I half expected the jet lag to mess with me good. But so far I feel pretty normal. Fingers crossed.

This time around I brought with me an arsenal of anti-parasitic/bacterial supplements. Maybe I can stave-off a gut-busting vomiting spree. Again, fingers crossed.