Planning for the Zombie Apocalypse 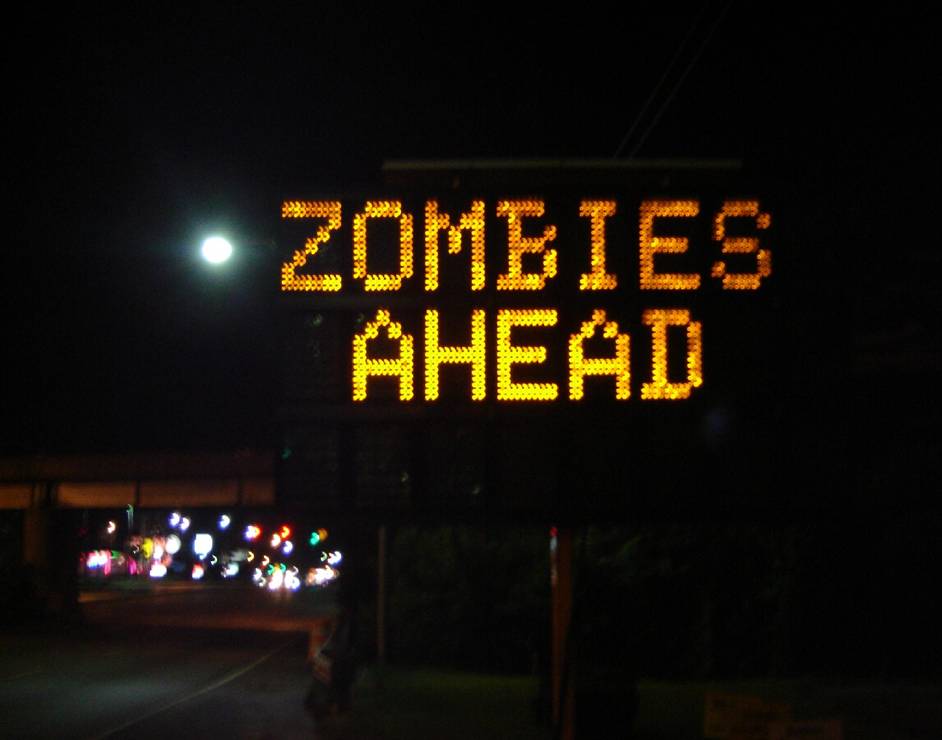 One day you’ll be sitting on your couch watching TV. Your face will be sheet white, your mouth hanging open, your palms sweaty. You’ll be watching your favorite news reporter explain to you that dead people in your community are walking around, with crazy eyes, attacking and eating your neighbors. And just as he’s recommending that you to stay indoors until someone figures out why and what to do about it, the power will go out. You don’t know it, but somewhere miles away the people who run the power grid are busy either looking for brains to eat, or struggling to keep the brains they already have from being eaten.

This is going to happen.

And because your wife needs a hair dryer, you’re going to ignore the news reporter’s recommendation and leave the safety of your home to wander about, dodging and destroying zombies, looking for a gas generator. But inevitably, what you’ll end up finding is a fat helping of brains. Maybe even your family’s brains. A recent poll found that, during the zombie apocalypse, by far the most common thing an average person would do is: taste delicious.

That is why today I urge each of you to begin learning about how to first reduce your consumption of energy, and then learn how to completely self-sustain that energy consumption off the grid. I guarantee you, if you wait until the zombie apocalypse to start this process, you will become zombie meat.

Americans use 6 times the energy per capita than the world average. This means that we’re 6 times more screwed than the rest of the world when zombies take down the grid.

So why do we use so much energy? Much of it is simply due to ignorance.

A recent study that quizzed Americans on what they thought were the most effective ways to save energy, revealed that many Americans believe that the biggest savings come from small behavior changes that actually achieve very little (like turning off lights), and severely underestimate the major effects of switching to efficient, currently available technologies (like energy-saving washers and dryers).

Researchers prior to that study have concluded that American households could reduce energy consumption by some 30% simply by making better buying decisions, all without big economic sacrifices, new technology, or disruptions to the standard American quality of life.

Basically, we can use much less energy just by being more informed consumers. It’s what we refer to in the zombie world as a no-brainer.

Ok, so you’re on your way to minimizing your energy consumption. Now what? You might be thinking that since zombies won’t last very long, you’ll be ok with a generator and a stockpile of gas. Hell, you might even bag yourself a couple zombies and run them out one at a time on a zombie-wheel generator. Sure, that could work.

But have you considered the post-apocalyptic chaos where the survivors are killing each other over dwindling resources? What then?

You’re far better off with a sustainable energy source like solar, wind, geothermal, hydroelectric, or even biofuels. Nearly all of these systems can be built from commonly available parts by anyone with some time, determination, and of course, brains. But keep in mind that many vital components to these systems are built using advanced manufacturing techniques. These may become unavailable to you when the world’s economies completely collapse, and all the remaining engineers and scientists are being kidnapped by ruthless survivors with guns.

So get started soon by first evaluating all of these technologies to determine which are well suited to your hideout. For example, it’ll be hard to build hydroelectric if your hideout isn’t near any natural water sources.

Then you’ll want to calculate the break-even based on your current energy expenditures, government subsidies, output, and your expected lifetime… but cut that lifetime in half because of the zombies. This will help you rationalize the sizeable upfront investment. You might even find that you can make some money from selling the surplus energy back to the grid. Of course, once the zombies destroy the grid, that becomes irrelevant. But it still might help you sell the whole idea to the wife.

All the information you need to become a more efficient consumer and, ultimately, live a self-sustaining lifestyle are online. Simply seek it out. But don’t wait too long, zombies will take down the internet too.

Trust me, this is going to happen.